The Ethereum merge is most likely to be one of the most influential events in the history of DeFi. But what does that mean exactly? If you’re new to crypto or you’re not very familiar with Ethereum, you may be confused by all the fuss about this upcoming change. That’s why we’re going to explain in detail what is Ethereum, what the upcoming merge is all about, and how you should be prepared for this moment that crypto enthusiasts have been anticipating for a while now.

Before going into more details about what is the Ethereum merge, we’ll cover briefly what is Ethereum, so you have a little background going into the topic. Ethereum appeared six years after the first crypto Bitcoin and was heavily influenced by it. Vitalik Buterin, one of the main creators behind Ethereum decided to take inspiration from Bitcoin but improve its technology. Through his innovative solution, Ethereum came to be – the first-ever programmable blockchain.

What does that mean exactly? The Bitcoin blockchain serves the sole purpose of transaction verification and mining of bitcoins. However, Buterin saw the potential of the technology and created Ethereum to be more – a network where other creators could build their own decentralized applications, or dApps, as well as serve the transaction purpose and mine Ethereum’s native asset, Ether (ETH). This means that the Ethereum network is a place where people can create their own crypto tokens, NFTs, decentralized exchanges, smart contracts, and other dApps. Even though many similar blockchains have appeared after Buterin’s creation became successful, this is by far the most famous and frequently chosen programmable blockchain and it’s no wonder that it’s been named “the king of smart contracts”.

What Is the Ethereum Cryptocurrency?

We’ve already hinted that Ethereum has its own crypto, it’s called Ether or ETH. It’s common in the decentralized space to call the cryptocurrency by the name of its blockchain, however, when we’re talking about the Ethereum merge, we’re focusing on the blockchain Ethereum, not its crypto. It’s worth mentioning that after the event we’ll discuss shortly, the cryptocurrency will also be affected. The ETH crypto is the second biggest digital asset by market capitalization, outbested only by the first crypto Bitcoin, and according to many, it has the potential to “flip” Bitcoin and take the leader spot. The purpose of Ether is to pay gas fees on its native network, the payment required for the computing energy used for transaction validation. Currently, ETH is being mined, which means that a considerable amount of energy is required for its creation, as well as for the validation of other transactions on the network. Will that change after the Ethereum merge and how? Let’s find out. 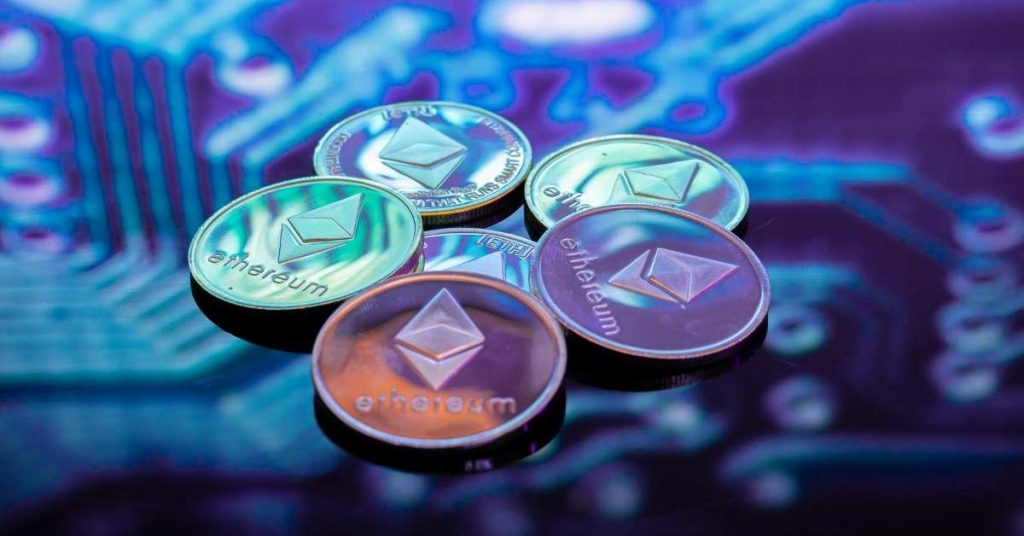 What Is the Ethereum Merge and Why Is It Happening?

The Ethereum blockchain was launched in 2015 and since then, it’s been relying on the Proof-of-Work consensus mechanism. That’s due to the fact that this is the mechanism that Bitcoin, the first crypto introduced, and back then, the alternative mechanisms weren’t as popular or spread out. The simple explanation of Proof-of-Work, or PoW, is that this is the way that the blockchain transactions are validated – through a combination of resources by many people, or miners, around the world, who compete to solve complex math problems and for it, they need to use a considerable amount of electricity and computing resources.

In return for every solved problem, which leads to validating transactions, the miner who did it receives a certain fixed number of awards of the mined crypto. Even though Vitalik Buterin wanted to upgrade the Bitcoin technology, he chose this method for Ethereum. Bitcoin still relies on it but has been getting an increasing amount of criticism from eco-activists and crypto skeptics who claim that this way of mining is very unsustainable for the environment and should be changed. Buterin and his team listened to these claims and that’s why the Ethereum merge was initiated, to make Ethereum more sustainable through a new consensus mechanism and to give it additional benefits.

Knowing why the Ethereum merge is happening, now let’s explain what exactly it is going to be. The Ethereum blockchain is a layer-1 network or simply put, a base blockchain. This means it’s the main blockchain on which additional solutions, like off-chains and layer-2 blockchains, can be built. Since its emergence, the layer-1 Ethereum blockchain has been the place where everything has been happening for Ethereum – mining Ether, transactions, and smart contracts. As time passed and many chose Ethereum, the network started experiencing slower transaction rates and considerably high gas fees, along with the resources it required to mine ETH.

Here came the Beacon Chain. This is a new blockchain that used the Proof-of-Stake consensus mechanism, or PoS. PoS is the most famous alternative to PoW and instead of relying on miners to solve math problems, it requires the participants in the network to stake a certain amount of tokens to participate in the block validation. In this mechanism, the participants who have staked the largest amount of ETH coins get more chances to be the ones to validate transactions. In return, they also earn rewards, just like in PoW. The Beacon Chain relies on this new method that is supposedly a lot more sustainable than Proof-of-Work and the purpose of this new blockchain is to create new blocks, validate them, and reward validators with ETH.

So what will Ethereum merge? It will merge its layer-1 with Beacon Chain and shift to Proof-of-Stake, impacting the crypto ETH as well as how the whole network works.

Before we go a little further and explain what will the Ethereum merge change, let’s address “Ethereum 2.0” or “Eth 2.0”. If you’ve been in the DeFi space since the merge of Ethereum began, you’ve most likely heard of these two terms and may wonder what they are. Before the end of 2021, the developers of the blockchain had named the new blockchain Ethereum 2.0. However, they decided to leave this term in the past, and swap it for Ethereum upgrades in their new posts starting in 2022. According to them, this was done because Eth 1.0 is the execution layer of Ethereum, Eth 2.0 is going to be the consensus one, and then together, they’ll simply be Ethereum. This means that even though the term is now left out, if you’ve heard about it, or about Ethereum upgrades, those are the very same process that we’re discussing here, just with different names. 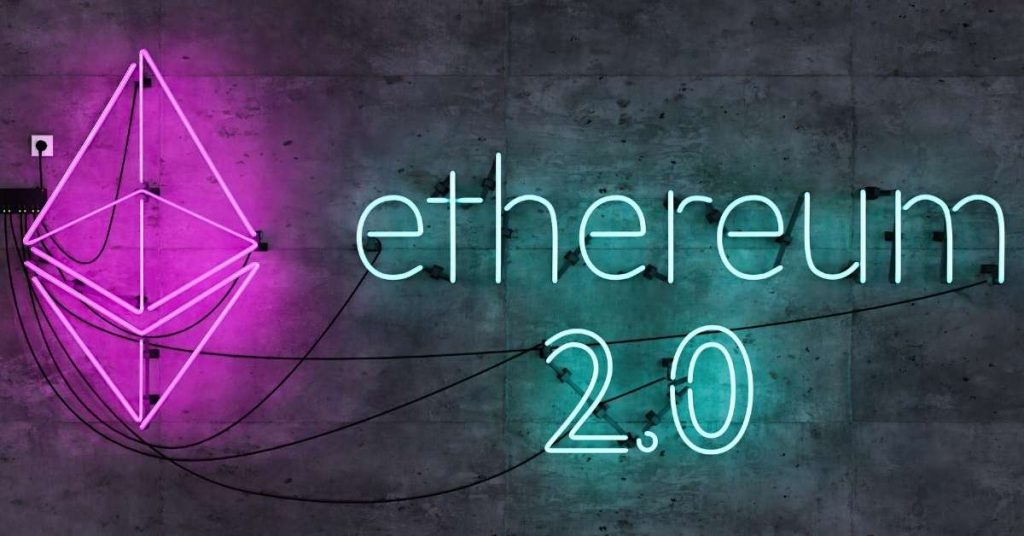 What Will Change After the Ethereum Merge?

Having learned what the Ethereum merge is, let’s now go over what will change after it. There are three main things that ETH holders are interested in how will change after this event – the speed of transactions, the price of gas fees, and the consensus mechanism of the network. We’ll now cover all of them in a little more detail.

⛓️ Proof-of-Work to Proof-of-Stake: We’ve already mentioned this change, basically the main one. In simple words, after the Ethereum merge, nobody will be able to mine ETH anymore, as the consensus mechanism will shift to staking now. Validators will now have to stake a certain amount of Ether to be able to validate transactions and earn rewards from it. However, for six up to 12 months after the Ethereum merge, stakers won’t be able to withdraw their staked ETH. This change will also make sharding possible in the future, the splitting of validation work into smaller amounts, allowing the network to handle more transactions as well as allowing more participants on the Ethereum blockchain, including phone users.

⛓️ Transactions speed: Supposedly, the transaction speed may increase slightly, but not as much as to be noticeable to average users.

⛓️ Gas fees prices: Like transaction speed, the developers of Ethereum don’t promise a change in the prices of gas fees, at least for now.

⛓️ The Ether token: Lastly, the change that will concern the Ether token besides the mining is the change in its issuance rate as it will be decreased by around 90%. According to some, this will turn ETH into a deflationary cryptocurrency, affecting the whole crypto market as a result

When Will the Ethereum Merge Happen?

The Ethereum merge date has been turned into a bit of a joke in the crypto community, as the developing team keeps pushing it back. It was supposed to be at the end of 2021, then in the beginning of 2022 and now finally, they’ve said a soft deadline (words from their own website) for September 19th, 2022. We’re only left to wait and see if it’ll actually occur this time, changing Ethereum, its crypto, and the whole world of DeFi, or we’ll have to wait for a more “solid” deadline for it.

How Should You Prepare for the Ethereum Merge?

Now that you know what the Ethereum merge is, how it will impact the blockchain and its crypto, and when it will happen (potentially), if you’re an ETH holder or want to be, you may be wondering what will change once Ethereum upgrades for you and should you somehow prepare for it. According to the team behind the biggest programmable blockchain, Ether holders shouldn’t do anything at all to prepare, only the node-operating stakers will be affected by the change, and your average crypto trader will still have their ETH tokens in their crypto wallet after the merge is done.

But you may want to still prepare for this event, mentally that is because it’s been hyped for so long, everyone in the crypto community expects it to have a grand impact on the whole market, as well as on how blockchain technology will continue to develop. So keep following the news and stay tuned for when the Ethereum merge happens. Hopefully, that’ll be soon and we’ll all see how exactly things will change.