Perhaps you’ve heard a little about cryptocurrencies and how they come to be and there was something about mining mentioned? Did you image a group of people going underground with their picks and getting the crypto out from the center of the Earth? We can’t blame you for this imaginative visualization if you’re not familiar with how some digital assets are created.

However, if you’re more into crypto and specifically Bitcoin, then you may be wondering could you mine it too? Or even “Can I mine Bitcoin on my phone?” because that’d be convenient, right? We’re here to tell you a little bit more about how Bitcoin mining works, what equipment you need for it, and answer if you can use your phone to mine bitcoins.

Can I Mine Bitcoin on My Phone: But First, What’s Bitcoin Mining?

Before we get into any specifics and answer your question “Can I mine Bitcoin on my phone?” let’s go over what it means to mine the crypto.

Casting any fantasy visions aside, Bitcoin mining is the process by which new bitcoins are entered into circulations and how new transactions are confirmed in the network. The mining process involves a network of many computers all around the world that verify and secure the blockchain. That is the core of blockchain technology – the peer-to-peer organization that doesn’t allow a central authority to control the finances, but instead, users are able to operate with them on equal grounds.

How Does Mining Bitcoin Work?

Bitcoin mining, as well as mining other cryptocurrencies, works by people, known as miners, solving difficult mathematical problems in a block (on the blockchain). The probability that a miner will be one to discover the solution is related to the portion of the network’s total mining power. After a miner becomes the one to solve the problem, they receive an award in the form of bitcoins or whatever crypto that they’re mining. When Bitcoin was first introduced, the rewards were considerably higher than today. But as time went on, they kept decreasing, to 6.25 bitcoins at the moment, since the scarcity of the first crypto grew, due to its limited supply.

Not all cryptocurrencies can be mined, only those that like Bitcoin rely on the Proof-of-Work (PoW) consensus mechanism. Some like Avalanche or Cardano rely on a newer consensus mechanism called Proof-of-Stake (PoS), meaning you can’t mine them but you can stake them instead. 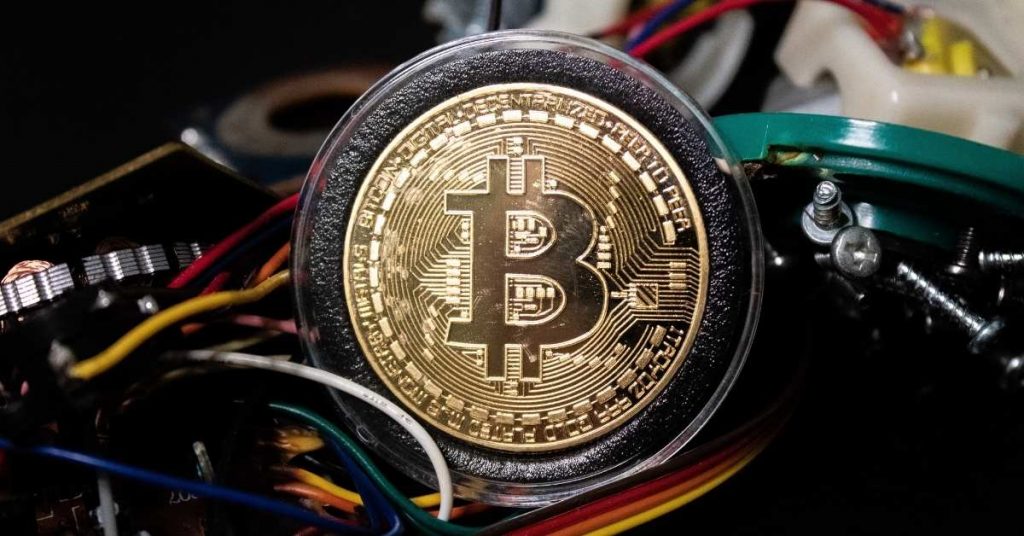 What Do I Need to Mine Bitcoin?

You’ve learned how Bitcoin and crypto mining works, but don’t get too excited just yet, wanting to try it. Let’s talk about what you need, besides the enthusiasm, to mine Bitcoin.

When Bitcoin first emerged, almost everyone with a stronger computer could mine it. However, as time went on and the popularity of the asset grew, this has changed. Today miners need a huge amount of electricity to solve the complex problems which lead not only to environmental concerns, but also it rose the need for special equipment. Today you can’t mine bitcoins with your personal computer. You’ll need a graphics processing unit (GPU) or an application-specific integrated circuit (ASIC) to mine bitcoin. That doesn’t go for all PoW cryptocurrencies though, some may take up less power and a stronger PC with some additional hardware could be enough.

However, to mine Bitcoin you need to invest in special equipment, as well as keep in mind that it may take some time before your initial investment gets covered from the earned rewards and you aren’t just spending. And you will be spending a lot, on electricity especially.

Are you still wondering can I mine Bitcoin on my phone? Let’s get to that now.

Don’t get discouraged just yet, the fact that mining Bitcoin or other cryptocurrencies require quite a lot of electricity or special computer hardware doesn’t mean that it’s impossible to do. It’s true that if you really want to earn from crypto mining, Bitcoin, or any similar asset, you’ll need to first invest a considerable sum in equipment and electricity before the activity pays off. However, there’s also good news – the answer to your question “Can I mine Bitcoin on my phone?”, or any crypto in general, is yes.

You have to keep in mind something before we get into further detail. As we’ve explained, you’ll need all that power and hardware in order to bitcoins because the sector has become highly competitive over time. Today there are even whole bitcoin mining facilities. This means that you and your smartphone be riveling with many who have a much bigger computer power than you. In return, those pros will be solving the problems faster, thus getting the rewards before you. While we’ve answered yes to “Can I mine Bitcoin on my phone”, you must know that you’ll get a considerably smaller sum than the miners with special computers. But that’s only fair, considering the amount of power and equipment you are putting into the process respectively.

How Can I Mine Bitcoin on My Phone

There are two ways to mine bitcoins or other PoW cryptocurrencies using your smartphone: solo or by joining a mining pool. Let’s go over both of them.

Can I Mine Bitcoin on My Phone on My Own

You could mine Bitcoin on your phone on your own, but keep in mind it may take you up to months to generate a small fraction of a Bitcoin reward. That’s due to the scarcity of this cryptocurrency and the high competition with better gear than simply a phone.

Can I Mine Bitcoin on My Phone With Other People

There’s a way to make a little more if you still want to mine Bitcoin on your phone. To do that you need to join a crypto mining pool – mining groups hosted on servers where everyone contributes computing resources to crack transactions.

How does it work?

If the pool successfully solves a problem on the Bitcoin blockchain, the whole team who contributed gets a fraction of the reward.

Apps for Bitcoin Mining for your phone

Apps like MinerGate Mobile Miner and Bitcoin Miner let you join mining pools and positively answer your question “Can I mine Bitcoin on my phone” while also giving you a reward that’s actually worth it.

Can I Mine Bitcoin on My Phone? Yes, but Is It Worth It?

You now know that the answer to “Can I mine Bitcoin on my phone” is yes, though there’s a catch, it may not be as profitable. By default, it may be hard to start earning from Bitcoin mining alone at home, even if you’ve bought the needed hardware and you’ll willing to pay big electricity bills. At this point, the people who are mining the first crypto are so many, and a big part of them are already professionals, that you’ll be in a very tight spot. However, as we said, you can definitely try your luck at using your phone to mine bitcoins. Just keep in mind that the rewards will be a lot lower than for miners with powerful computers and special gear.

If you’re thinking “Can I mind Bitcoin on my phone” is a yes but “why would I do it if I don’t earn much”, there’s still an advantage to it. As we mentioned a few times already, if you use your phone to mine BTC you’ll use just that – your device and an app that’s compatible with it. However, if you decide to mine Bitcoin on your computer, you’ll have to invest a considerable sum before you start earning for real, even if the rewards are much bigger. You’ll have to be very patient to wait out for the time when all of your expenses are covered and you’re earning a true reward from Bitcoin mining. And keep in mind, that may a lot of time or even never happen since the competition is so strong. So it goes without saying, can I mine Bitcoin on my phone and get rich from it has a negative answer.

However, if you don’t want to invest more seriously in crypto just yet, and are only looking for ways to get familiar with it, you can definitely give it an option. You now know how can I mine bitcoin on my phone and you can definitely give it a try, either alone or by joining a mining pool. You’ll have to be prepared for the app to drain a considerable amount of your battery since it runs in the background of your activities, but besides that, it’s not that much commitment for a beginner. 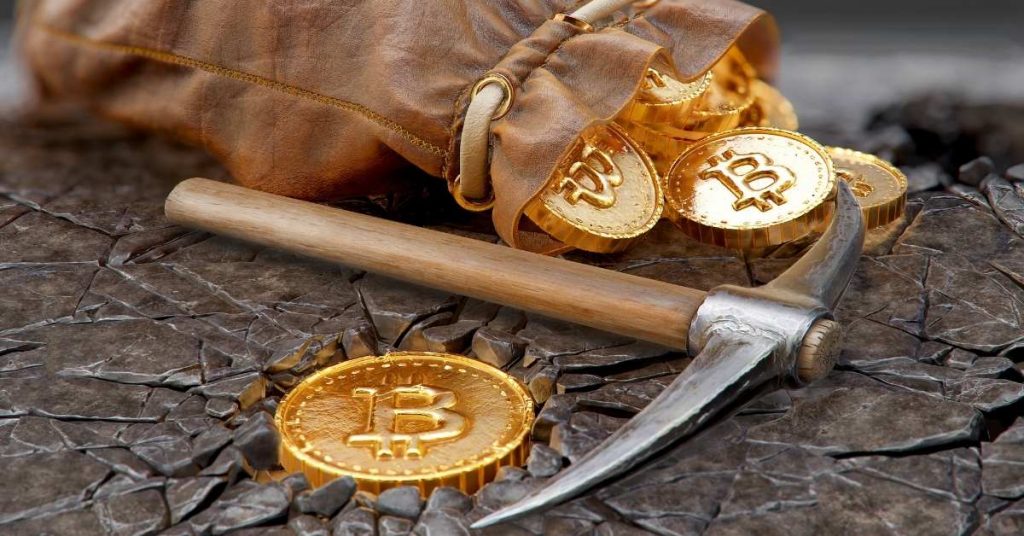 Can I Mine Bitcoin on My Phone in the Future?

We’ve covered this already, but the strong professional competition isn’t the only reason why mining Bitcoin on your phone won’t be as profitable as you may wish it to be. The reason why “Can I mine Bitcoin on my phone in the future” may be even less possible or profitable than today, is the limited supply of the asset.

When Bitcoin was released, it was established that there ever will be only 21 million bitcoins, meaning the supply of the crypto is limited. If you look at newer assets, some have trillions in supply, like Shiba Inu coin, or some are even unlimited. That doesn’t work well in their favor though, as the low supply calls for higher demand, meaning the more scarce a crypto is, the more valuable it can be. The limited supply of BTC is also why it’ll get more and more hard to mine it in the future, as we’re already at 19 million in circulation.

That’s why it’s likely that the answer to “Can I mine Bitcoin on my phone in the future?” will be yes, at least for a while, however, it will be even less profitable than it is today and it will take a lot longer. This practically means that you’ll just be hanging out with other smartphone crypto miners in a pool, waiting for a Satoshi from a bitcoin reward but not knowing will you get it.

Knowing Can I Mine Bitcoin on My Phone, Should I Do It?

We’ve answered your question “Can I mine Bitcoin on my phone” with a “yes”. But the answer to “Should I mine Bitcoin on my phone” can be given by only yourself. We can’t make any decisions on your behalf, nor are we advising you on any financial paths. We’re only here to provide you with the essential information you were looking for when you decided to search if it’s possible and worth it to mine crypto using your smartphone.

In reality, you may receive some rewards from apps for mining pools for other PoW coins. However, Bitcoin’s gotten so big at this point, that the mining competition is incredible. You may get a tiny bit of bitcoins after some time in a mining pool, more likely than if you’re trying to mine BTC alone on your phone, but still, the reward won’t equal the ones miners with special computers are getting. As we’ve mentioned the answer to “Can I mine Bitcoin on my phone and get rich from it” is no, but if you’re willing to spend your time doing it, you may run the app in the background and get some small part of the crypto.

Sure, you won’t become a Bitcoin millionaire. But you’ll get to spend some time with other crypto miners-wanna be folk and as we all know, the community in the decentralized world is one of the most essential parts of it.